National Day of Remembrance and Action on Violence Against Women

Twenty-seven years ago, on December 6, 1989, fourteen women were murdered at L’Ecole Polytechnique in Montreal. When a man with a gun entered the engineering school, he separated the women from the men, shouting that he was fighting feminism. The women he killed lost their lives to gender-based violence, a hate crime that has come to symbolize the ongoing need to end violence against women and girls.

As educators and academic workers, this anniversary has a particularly poignant significance for us. This horrific act of violence took place on a campus. On that day, I was in a classroom at UVic supervising my history students writing their final exam. An attack could have taken place in that classroom, or any classroom in which we work, environments we presume to be safe spaces, for us and for our students. 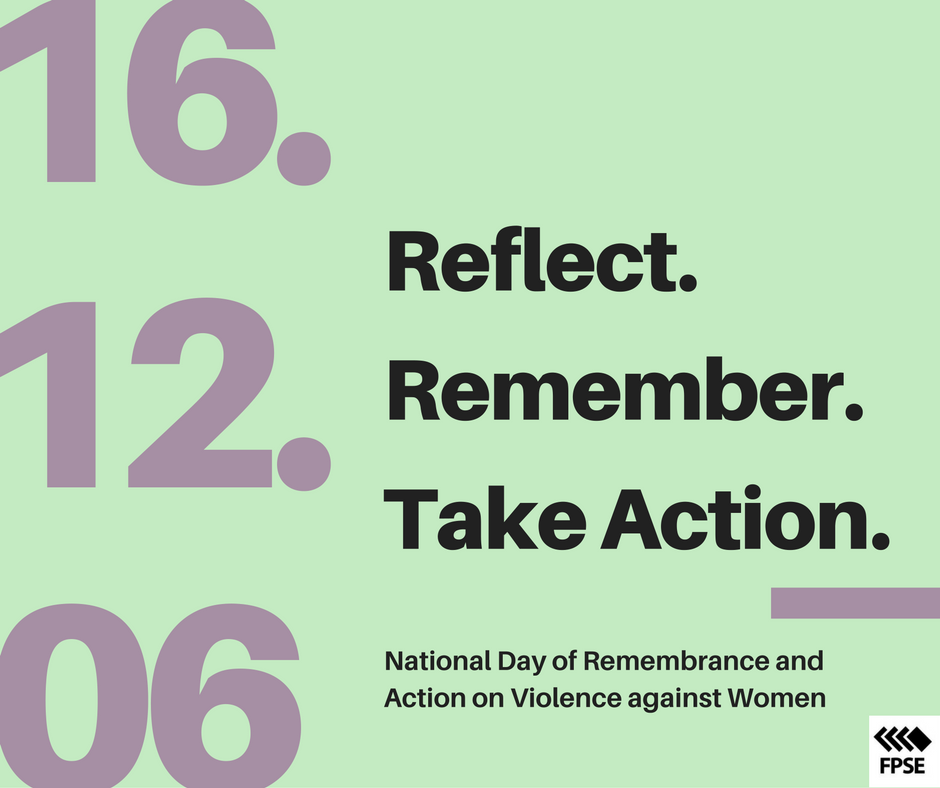 December 6 was proclaimed the National Day of Remembrance and Action on Violence against Women in 1991. Twenty-five years later, we have as much need for action as we did then. In an era where a man accused of multiple sexual assaults, a man who gleefully speaks of his aggression and demeaning behaviour toward women, can be elected as President of the United States, it becomes more important than ever to speak out against acts of violence, misogyny, and sexism.

Gender equality is not faring better in Canada than it is in the U.S. A recent report card by West Coast Leaf, issued after the United Nations report on gender equality in Canada, noted a number of concerns, including a high prevalence of gender-based violence, particularly against indigenous women and girls; a very low number of cases of gender-based violence against women reported to the police by victims; low rates of prosecution, conviction and lenient penalties imposed on perpetrators of violence against women; and the lack of a national action plan.

In this last year alone, high-profile cases illustrate these troubling findings: the acquittal of Jian Gomeshi, for example, and Alberta judge Robin Camp’s egregious statements in a sexual assault case.

Acclaimed author Lawrence Hill recently wrote in the Globe and Mail, “When a woman steps forward to say that she is not safe or has been ill-treated in her university studies or in the office with her boss or at home with her partner, there can only be one response: You are welcome to speak. We will investigate and you will be safe.”

As academics, educators, and union members, we must work toward creating spaces where women are safe, and in the event a woman feels unsafe, for ensuring that she has the same access to fairness and due process as those against whom the allegations are made.

This year, I ask you to join me in remembering the women who lost their lives in that Montreal classroom, the over 1000 murdered and missing indigenous women from across Canada, and the countless women who have experienced acts of violence. Whether it’s in the home, in the classroom, in the community, or among friends, I ask you not to let acts of sexism or violence go silently by. These women deserve no less.