November 20 is Transgender Day of Remembrance, held annually to remember the people killed due to anti-transgender hatred or prejudice. This past year, 73 people around the world have lost their lives to anti-trans violence. Just as tragically, the suicide rate for trans people in Canada is one of the highest. Over 10 per cent of trans Canadians have attempted suicide.

Trans people also face violence and prejudice in the workplace, experiencing high levels of sexual, physical, and emotional harassment. For the labour movement, speaking out against trans violence is an important part of our long history of struggle against all forms of discrimination.

“As educators and labour activists, we strive for safe spaces for all transgender and gender variant individuals, in our workplaces and in our classrooms,” said FPSE Secretary-Treasurer Terri Van Steinburg. “We remember those who have lost their lives due to anti-trans violence, and work toward ensuring no one else ever does.”

Transgender Day of Remembrance began as a memorial vigil held in San Francisco, California in 1999 in memory of Rita Hester, an African American woman who was murdered because she was trans. To date, her murder remains unsolved.

“This Day of Remembrance is an opportunity for all of us – trans people and allies – to take a stand against transphobia and violence,” said Van Steinburg. “Let’s work together to provide safe and supportive spaces for all.”

On November 20, join us in remembering those who have lost their lives. Join us in the fight to ensure that all trans people have the opportunity to live full and healthy lives.

CLICK HERE http://tdor.info/ for more information about the trans people who lost their lives in 2015. 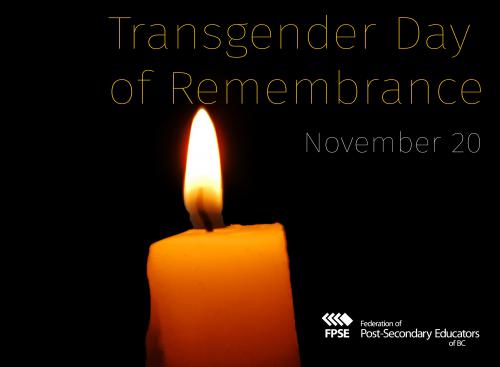